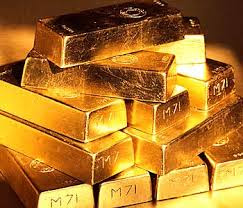 The  of Texas Investment Management Co., the second-largest  academic endowment, took delivery of almost $1 billion in gold bullion and is storing the bars in a New York vault, according to the fund’s board.
The fund, whose $19.9 billion in assets ranked it behind Harvard University’s endowment as of August, according to the National Association of College and University Business Officers, added about $500 million in gold investments to an existing stake last year, said Bruce Zimmerman, the endowment’s chief executive officer. The holdings are worth about $987 million, based on yesterday’s closing price of $1,486 an ounce for Comex futures.
The decision to turn the fund’s investment into gold bars was influenced by Kyle Bass, a  hedge fund manager and member of the endowment’s board, Zimmerman said at its annual meeting on April 14. Bass made $500 million on the  subprime-mortgage collapse.
“Central banks are printing more money than they ever have, so what’s the value of money in terms of purchases of goods and services,” Bass said yesterday in a telephone interview. “I look at gold as just another currency that they can’t print any more of.”
Gold reached an all-time high of $1,489.10 an ounce yesterday in  as sovereign debt concerns boosted demand for the metal as a store of value. Gold has climbed 28 percent in the past year on Comex.
The endowment, which oversees funds held by the  of  and Texas A&M University, has 6,643 bars of bullion, or 664,300 ounces, in a Comex-registered vault in  owned by HSBC Holdings Plc (HSBA), the London-based bank, according to a report distributed at the meeting in .
Source: http://www.bloomberg.com/news/2011-04-16/texas-university-takes-cue-from-kyle-bass-to-hold-1-billion-in-gold-bars.html
Posted by Dinar at 10:27 PM